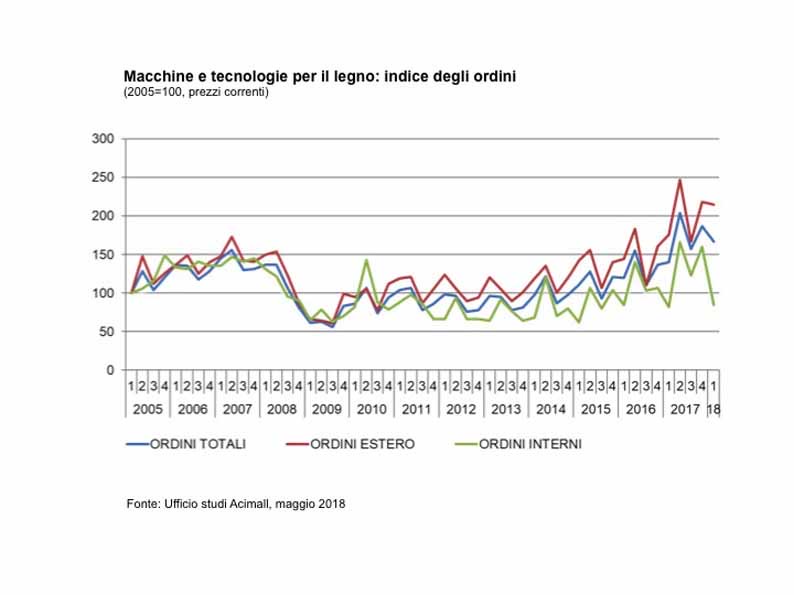 The Italian technologies dedicated to the furniture industry and wood processing and its derivatives mark a very positive first quarter of 2018. According to the usual quarterly survey by Acimall, the Italian woodworking machinery and accessories manufacturers' association, the data for the first quarter of 2018 confirm the excellent performance of 2017, a year that marked a 10% increase in production, 5% compared to the previous year for a value of 2.27 billion euro, an exceptional figure for the sector.

The period January-March 2018 shows a growth of 19.2% compared to the same three months of 2017. It is once again the export to be the driving force for the sector with a + 22.1% on the first quarter of 2017; even the domestic market grows even if with less striking values, however, reaching a remarkable 3.7%. In Italy, the market seems to show a sort of period of reflection after the investment boom of the past months in the wake of the provisions concerning “Industry 4.0“.

The order book for 3.4 months was also positive (3.6 in the previous quarter), while prices from 1 January showed a slight increase (0.6%).

According to the qualitative survey prepared by Acimall for the first quarter of 2018, 65 percent of the sample considers the production trend to be positive, while it is judged steady by 29 percent and down by 6 percent.

Employment is judged stable by 35 percent of the sample, up from 53 percent, down for the remaining 12 percent.

As for stocks, they are considered stable for 65 percent of respondents, up 29 percent, down 6 percent.

The results achieved so far hope Italian companies to hope for the future of the next few months: 41 percent of those interviewed expect an increase in foreign orders, while for 47 percent they will be stationary; down by 12%. In terms of the internal market, 23% of respondents is confident, while 65% expect that sales within the borders will be stable and 12% believe they will decrease.

Wood and furniture technologies: an exceptional first half of 2021

Orders for wood-furniture machinery and tools up 100.3% over same half of 2020
Category: Economics and Marketing
Publication date: 20/09/2021
Discover more