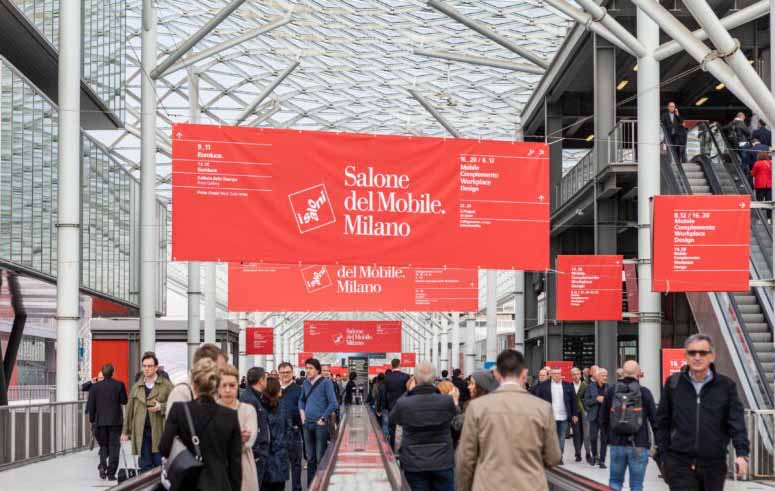 In the end, the Milan Furniture Fair will go ahead. After a week of turmoil that has seen the possible cancellation of the event, the resignation of Claudio Luti from the presidency of the Salone del Mobile. Milan, the fall of Fiera Milano on the stock exchange and the raising of shields by Federalberghi and Confcommercio, followed by the declarations of the mayor of Milan, Beppe Sala, and the president of the Lombardy Region, Attilio Fontana, and even the national government, in the end, as we were saying, the Board of Directors of FLA Events has decided to confirm the fifty-ninth edition of the Salone del Mobile.Milano from 5 to 10 September 2021 in the halls of FieraMilano Rho.
It will be, as stated in the press release, “an innovative, iconic, unique edition. It will have a brand-new look, focused on highlighting the companies' innovations, technologies and projects. It will pick up “the thread“ of a discourse interrupted in presence, but not in relation, contact with the market, professionals, customers or simple enthusiasts“.

An internationally renowned curator will coordinate the event

The project for the 2021 event, which was first announced to the Presidency of the Council of Ministers and then to all the national institutions involved and those in the area, as well as shared with the historic partner Fiera Milano, will be entrusted to and coordinated by an internationally renowned curator and will aim to strengthen ties, relations and concrete actions with the economic and social fabric that recognises the centrality and importance of Salone del Mobile.Milano.
The Salone, open to all international and Italian exhibiting companies, will be held at FieraMilano Rho and will feature integrated exhibitions and themed itineraries with products and innovations from the last 18 months that will dialogue with a new digital platform that will be presented shortly. The exhibition will be held in compliance with the prevention and safety directives and ordinances envisaged by the government for the holding of trade fair events.

It is believed that the appointment with the Salone del Mobile in Milan will develop numerous adhesions and a global representation of products, excellences and innovations in the sector and that, thanks also to the contribution of a historically productive and strongly dynamic territory, it will be possible to develop those initiatives and events that in terms of climate and environment have always made it a “world uniqueness“.
“I am confident that, thanks to the support received from the institutions, first and foremost from the President of the Republic, Sergio Mattarella, and the Prime Minister's Office, as well as from the other ministries involved and participating,“ emphasises Gianfranco Marinelli, President of FLA Eventi SpA, “and the willingness of the companies to contribute to the success of the event, we will be able to create an innovative and internationally attractive quality exhibition. We are aware that the success of an event such as the Salone del Mobile.Milano will be confirmed by the fact that citizens will understand and appreciate, once again, the contribution it is able to give to the country in terms of growth, image and credibility. I am proud to say that this time too we will give our contribution“.
Claudio Feltrin, President of FederlegnoArredo, emphasises that “a great challenge has been won: to give companies, from large to small, that represent the fabric of the supply chain, the best showcase to highlight international and Italian-made excellence“. Now we will continue in this direction,“ concludes Feltrin, “as always in close synergy with the City of Milan. The certificates of esteem and support that have been received in recent days from all national and local institutions are the best recognition of the many entrepreneurs who, over the years, have made the Salone del Mobile a unique concept admired throughout the world.

Sicam 2021: the fair of recovery, an expected return to normality

Made Expo changes date: construction exhibition will take place from 22 to 25 November 2021

The postponement of the event to November is intended to represent a real global restart.
Category: Fairs
Publication date: 18/01/2021
Discover more

Despite investments and general optimism, the situation does not guarantee the smooth running of the event
Category: Fairs
Publication date: 11/12/2020
Discover more

The change of date as a result of articulated reflections by the top management of Salone del Mobile and Fiera Milano
Category: Fairs
Publication date: 27/11/2020
Discover more