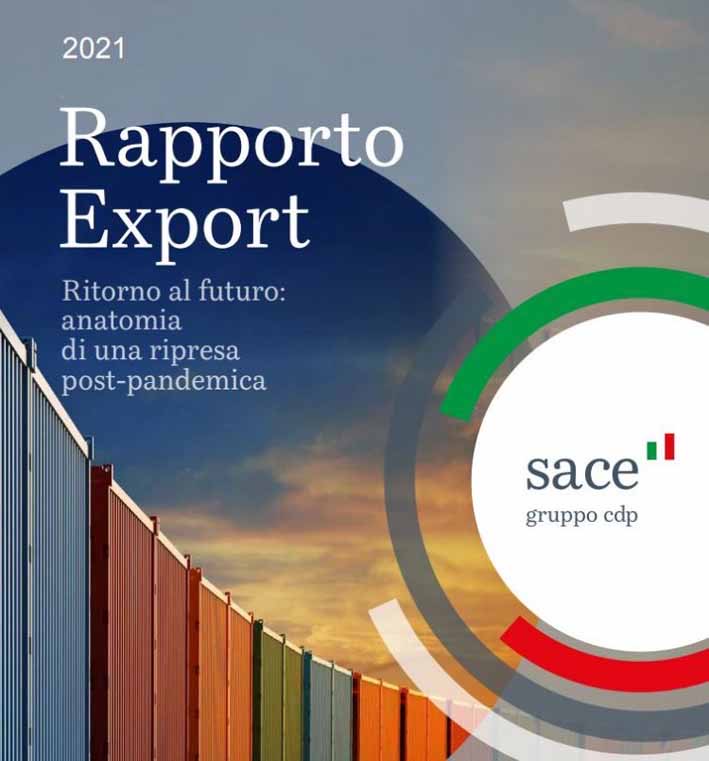 The national export of goods runs and recovers: 482 billion euros in 2021, up 11.3% compared to 2020; +5.4% in 2022 and +4% on average in the following two years to reach 550 billion euros in 2024. This is what emerges from the Export 2021 Report of the SACE's Ufficio Studi, with the significant title “Back to the future: anatomy of a post-pandemic recovery“. The Report, now in its 15th edition and presented online on the SKY platform, was attended by the main institutional stakeholders and the business world, including Daniele Franco, Minister of Economy and Finance, Luigi Di Maio, Minister of Foreign Affairs and International Cooperation, Barbara Beltrame, Vice President for Internationalization of Confindustria, Francesco Starace, CEO of Enel, Maria Bianca Farina, President of Poste Italiane and President of ANIA, and Federico Ghella, Vice President of Ghella and President of the ANCE work abroad committee. SACE was represented by Managing Director Pierfrancesco Latini and Chief Economist Alessandro Terzulli, who highlighted how Italian exports have returned to growth after the interruption of the pandemic crisis.

Made in Italy: in 2021 exports will reach higher levels than pre-pandemic levels

The year 2021 is therefore confirmed as a year of transition characterized by a strong rebound of the global economy that, even if with variable speed in the different destination markets, will drive the sales of Made in Italy bringing it to higher levels than pre-pandemic ones.
This considerable performance will also be achieved thanks to the substantial recovery programs, such as the Next Generation EU in the EU and the infrastructure plan in the USA, which will generate additional demand.
In fact, SACE estimates a growth of 11.3% in Italian exports of goods in value, while for Italian exports of services, most affected by the restrictive measures linked to the pandemic with a negative impact especially on tourism, only a partial recovery is expected in 2021 (+5.1%). The real recovery will take place in 2022 when the export of services will return to the levels of 2019, thanks to an increase of 35.1%. Growth will also continue in the following two years at an average rate of 5%, touching 120 billion euros.

The Olympics of export: trends and destinations

In the year of the Olympics, the SACE Export 2021 Report has classified the main destinations of Made in Italy in the form of a medal table, assigning the gold medal to those countries where Italian exports have promptly recovered and will remain dynamic in the following years, silver to those where they will return to pre-crisis levels already this year, but will then proceed at a slower pace, to close with bronze to those countries that in 2021 will not yet have recovered their pre-crisis values.
The gold medal was awarded to Germany, the USA, China, South Korea, Japan, Russia, Poland and the United Arab Emirates.
The silver medal for exports goes to the countries that, according to SACE forecasts, will return to pre-crisis levels in 2021, continuing at a slower pace thereafter: these are France, the Netherlands, Brazil, Saudi Arabia, Malaysia, Chile, Morocco and Senegal.
Leading the countries with the bronze medal is the United Kingdom, whose effects deriving from exit from the EU will not allow it to recover pre-crisis levels before 2023. This is followed by Peru, Mexico, South Africa and Thailand.

As far as forecasts are concerned, SACE's Ufficio Studi has drawn up two alternative forecast scenarios with respect to the base scenario: the first assumes a positive shock on global confidence, favoring a more robust recovery; the other worsens in relation to the effectiveness of vaccines and the appearance of new Covid-19 variants with greater transmission capacity.
The first assumes stronger global economic growth in both 2021 and 2022, although acceleration would continue in the following two years at a slower pace and in line with the base case forecast.
In the second scenario, the recovery of the global economy would inevitably slow with a return to restrictive measures to contain contagion and a deterioration in business and household confidence. This scenario calls for lower initial growth followed by a marked decline compared to the base model.

The potential of PNRR and the benefits for Italian companies

The National Recovery and Resilience Plan (PNRR) is a unique opportunity for the post-Covid recovery and development of our country. For this reason, this year the SACE Export Report is enriched with an estimate of the economic impact of a full implementation of the structural reforms announced and their maintenance in the medium term.
The intensity of Italian GDP growth would be more pronounced along the forecast horizon, especially in the last three years; in 2025 national output would increase by 2.7% compared to the base model, as a result of the boost of investments and reforms. In addition, the structural reforms of the NRP would also increase the competitiveness of Italian companies active on foreign markets: the level of exports of goods, in value, in 2025 would in fact increase by 3.5% compared with what was forecast in the base scenario. 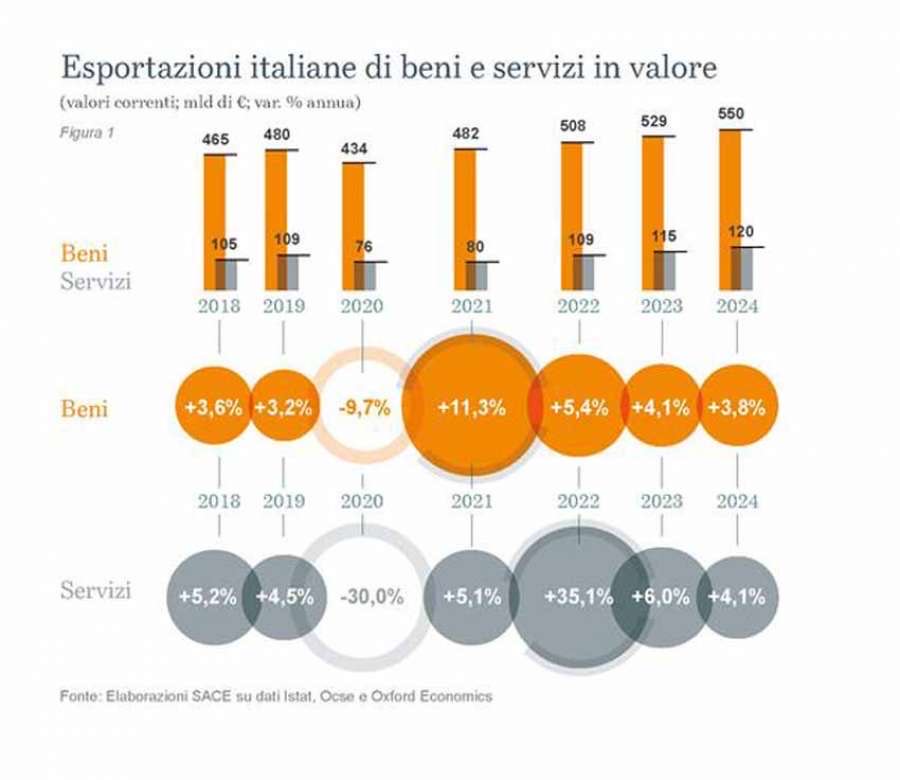 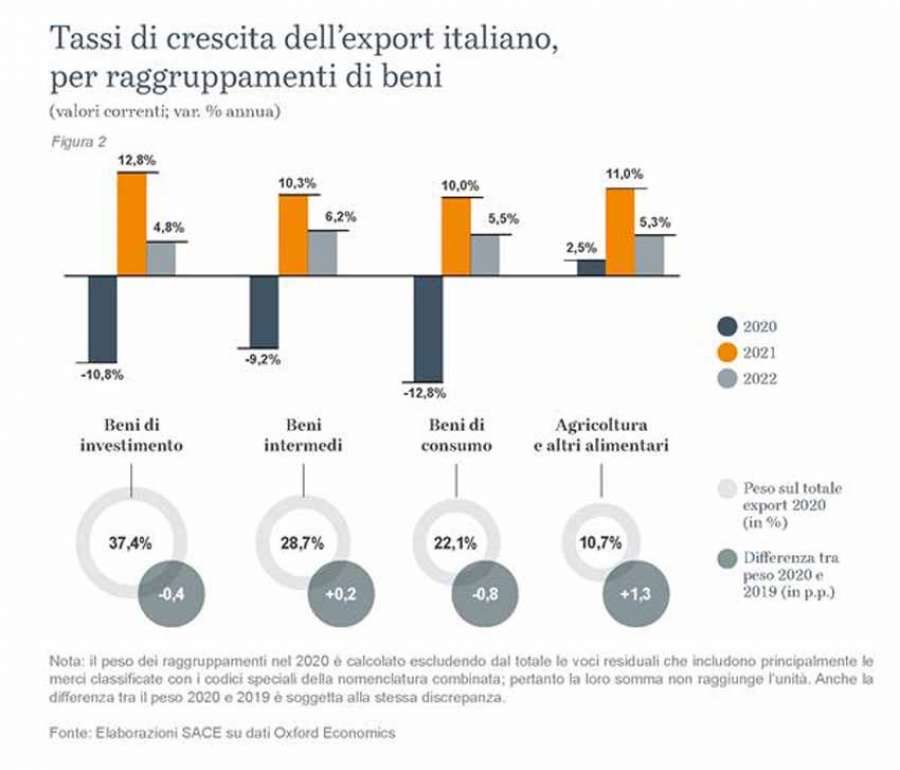 Italy's Beautiful and Well Made is worth 135 billion in exports

A great strength of our country with a growth potential of 82 billion lire
Category: Economics and Marketing
Publication date: 29/07/2021
Discover more

After a sharp decline in 2020, Italian exports are expected to recover robustly as early as 2021
Category: Economics and Marketing
Publication date: 15/09/2020
Discover more

The FederlegnoArredo General Assembly in Pesaro: to grow together

The wood sector is a leading element of the national economy
Category: Economics and Marketing
Publication date: 22/05/2018
Discover more