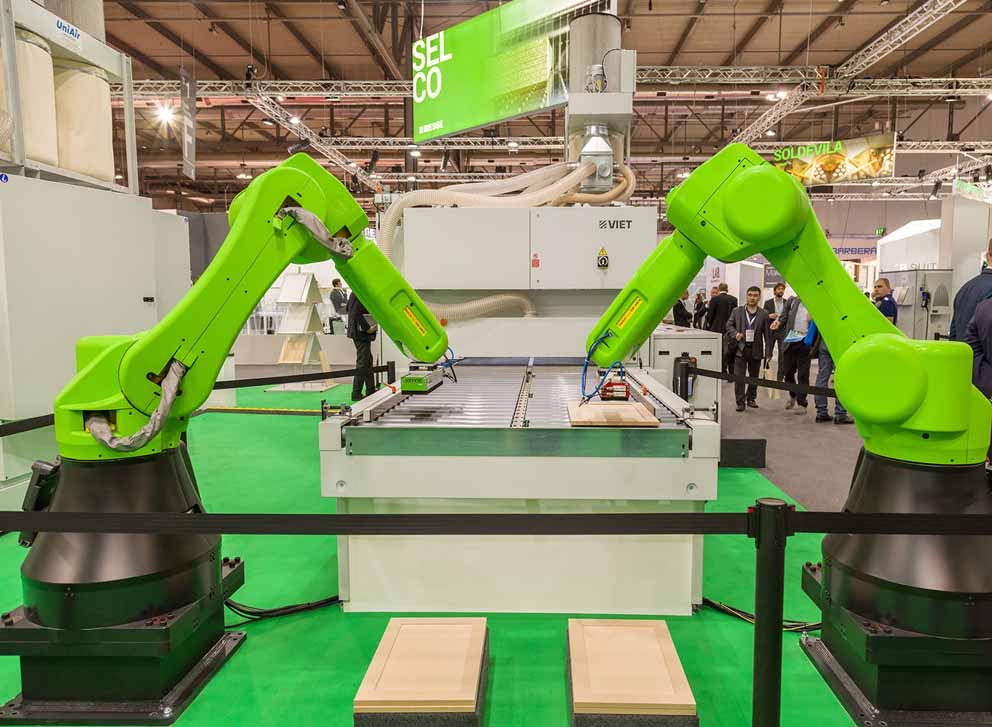 In the current situation it is difficult to make economic forecasts also because it is too early to assess the effects of the health emergency on the economy of the wood-furniture sector.
In the meantime, the Acimall Studies Office has drawn up the 2019 final balance for Italian wood-furnishing technologies, data that already reveal some not very encouraging signs on the state of health of the sector before the dramatic situation of these first months of 2020.
Dario Corbetta, director of Acimall, the industrial association representing companies in the sector, stressed how the sector is expected to face a season that will require firm nerves and a central economic policy as strong and proactive as ever, without which even the world of woodworking machinery could find itself paying a very high price.
“To the effects of Covid-19, continued Corbetta - we must unfortunately add a 2019 financial year in which the sector has seen a significant contraction, a trend that will therefore require an even greater effort to return to the levels of 2016-2018“.

As far as production is concerned, the Italian wood-furnishing technologies sector achieved a value of 2,266 million euros in 2019, down 9.9 per cent compared to 2018. A decrease due to a first part of the positive year, which was unfortunately followed by another one that registered more considerable decreases involving all the strongest international competitors, starting from Germany.
Exports fell by eight percentage points in 2019, showing substantial resilience in mature markets. Italy enjoys a marked capillarity in export flows, which has seen the significant difficulties in some markets offset by the trend in other contexts.
As far as the domestic market is concerned, the drop was 13.5 per cent, reversing the trend of an index that had always been positive in the last five years, thanks also to the tax incentives that allowed many Italian companies to update their fleet in the three-year period 2016-2018, with inevitable repercussions on purchasing policies in subsequent years.
Finally, imports have decreased even more significantly, minus 17%, while the trade balance is still very high (1.4 billion euros).
The Italian wood-furniture technology sector therefore confirms its very strong propensity to export, one of the sectors that contribute most to Italy's positive trade balance.

It is interesting to see which countries have chosen Italian wood-furnishing technologies more than others. In the lead we find France, which closes 2019 with an increase of 5 percentage points compared to the previous year, reaching a value of 110 million euros. On the other hand, exports to Germany are down (102 million, minus 9.3 per cent), while as far as results in Poland are concerned (minus 20 per cent) the extremely positive trend of recent years has been decisive, with investments that have led to a saturation of demand and, therefore, to this sharp drop.
Also in Europe, the Acimall Studies Office reports a contraction in exports to Spain (minus 8.9%) and the United Kingdom (minus 13%). Russia and Turkey deserve a separate mention: the former, which has been in difficulty for several years due to currency tensions and the credit sector, shows a further decline of 9% and stops at a value of 38 million euro. On the Turkish side, on the other hand, after years marked by lively demand, our exports have stopped at EURÂ 11Â million, more than 50% down on 2018.

Let's now see the non-European destination markets of Italian wood-furnishing technologies. As far as Africa is concerned, our exports are down by 25% overall. The North American area, on the other hand, is holding up very well, with the United States being the first destination market for Italian woodworking machinery, even though it recorded a 5% decrease on 2018, for a value of just under 200 million euros.
In South America, Argentina continues to decline, losing more than 50 per cent (€6 million), while Brazil returns to growth, increasing demand for “made in Italy“ woodworking machinery by 30 per cent to €20 million. It should be noted that this market has experienced years of continuous decline, reaching an all-time low in 2018.
In the Middle East, the Italian wood-furnishing technology sector sold machines for 33 million euros, 14 per cent less than the previous year. In the Far East, China confirmed its undisputed dominance, buying Italian technologies for 63 million euros, 17.4 per cent less than in 2018. This decrease is mainly due to the difficulty for Italian companies to face the internationalization process and to the increasing technological expertise of local machine manufacturers. Added to this are the tariffs that have penalised the Asian furniture industry and which, as a result, have negatively affected the demand for technology.
Finally, in 2019, Australia purchased 38 per cent less Italian woodworking and furniture machinery, amounting to 20 million euros. Also in this case the negative change is largely due to the extremely positive results recorded in 2018 and, therefore, to a process of “normalisation“ of the market value. 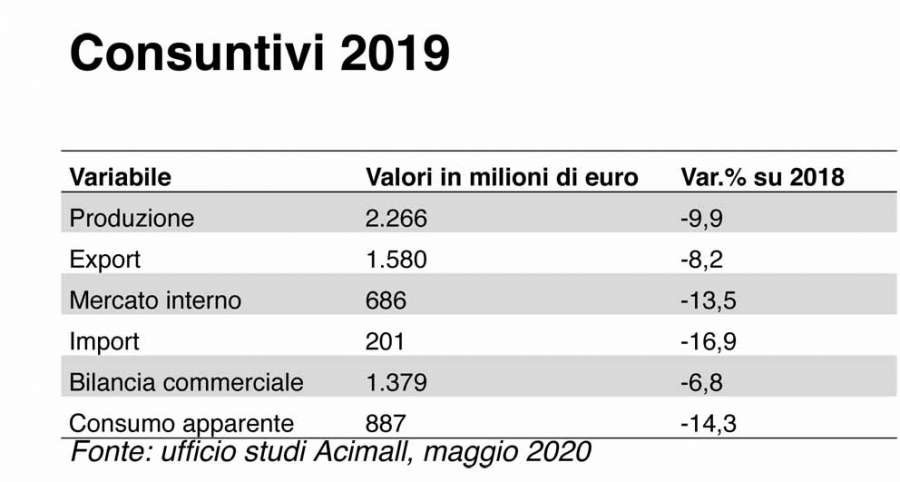 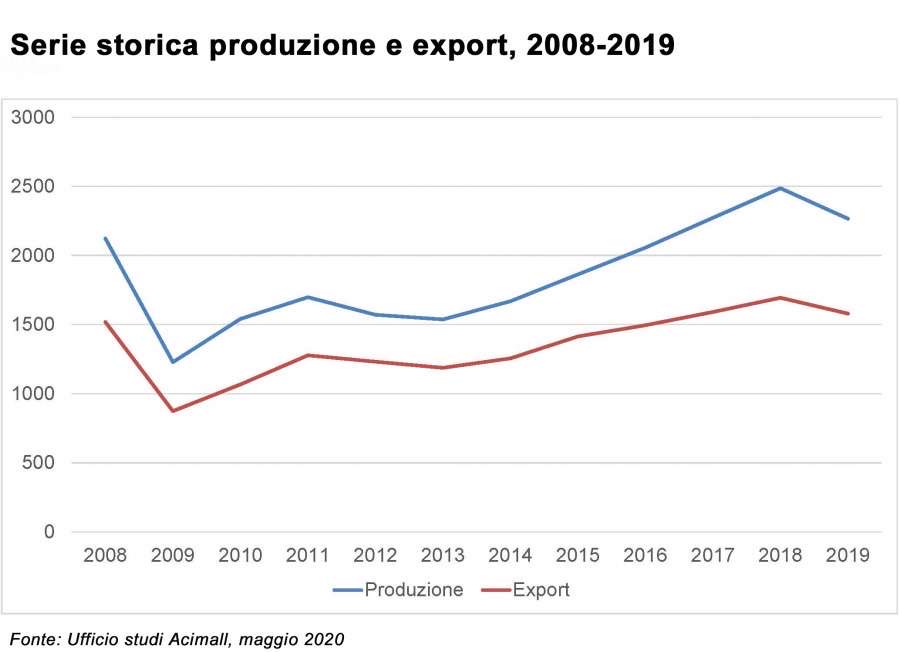 The biennial 33.BI-MU and Xylexpo together at FieraMilano-Rho in October 2022

Strong increase in demand for technology for the furniture and wood industry >
Category: Economics and Marketing
Publication date: 19/05/2021
Discover more

Encouraging signs for a sector that is able to cope with difficulties and looks to the future with cautious optimism>
Category: Economics and Marketing
Publication date: 17/03/2021
Discover more

Encouraging signs for a sector that is able to cope with difficulties and looks to the future with cautious optimism>
Category: Economics and Marketing
Publication date: 17/03/2021
Discover more

Thanks to exports, the third quarter of 2020 recorded a more moderate decline than expected >
Category: Economics and Marketing
Publication date: 13/11/2020
Discover more